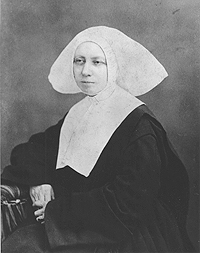 We trace our roots to Victorian England and All Saints Church Margaret Street, London, when it was old “Margaret Street Chapel”.  Here a wealthy London lady, Harriet Brownlow Byron (1818 – 1887) “left the world” on St Luke’s Day, 1851 and began a life dedicated to Christ and the service of the poor.

With the help of the English priest, William Upton Richards (1811 – 1873), Miss Byron became one of the courageous women re-founding the Religious life in the English church.  This was the London of Charles Dickens and there was something Dickensonian about the early days when Miss Byron took in homeless children and tubercular women, one of whom did the cooking!  She begged at the service entrances of the homes of the wealthy where she had once gone with her beaux!

Using a form of the Rule of St Augustine, she formed her community customs largely based on those current among the Daughters of Charity on the Rue de Bac, Paris, a community she had been close to since her youth in the 1830s.  She expected of her young sisterhood a spirit of kindness and good sense, coupled with a rich prayer life, and devotion to the Eucharist.

During the 1860’s, her community grew and in 1872 she sent 3 sisters to America, the first foreign mission.  This was in response to the request of Joseph Richey, Rector of Mount Calvary Church in Baltimore.  These English sisters began at once to work with poor children, mostly those of color.  They were almost as poor as the children they served!

In 1890 the American All Saints sisters built their first Convent in the city and became an affiliate house of the mother house in England.  Sister Frances Helen, an English woman, became the First American Mother.

In 1917 Mother Adelaide Frances (first American born Mother) relocated the Convent to the fields of Orange Grove where her sisters had worked with sick children.  Criticized for this decision, she felt, prophetically, that the future of the sisterhood would lie in Catonsville.

The All Saints Sisters in England and America were early pioneers in the field of nursing in hospitals.  Florence Nightingale was two years younger than Harriet Brownlow Byron.  They may never have met; however the two women had the same approach to managing hospital nursing.  The All Saints Sisters nursed at the front during the Franco–Prussian War of 1870.   In this field hospital (think MASH) they worked with the Little Sisters of the Poor and formed a lasting bond between the two sisterhoods the one Anglican, the other Catholic. 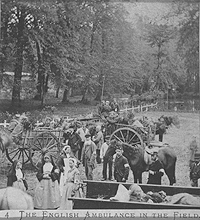 In America, Sister Helen (Bowden) of All Saints brought her nursing skills to Bellevue Hospital in New York when she became the first director of the new Training School for Nurses in 1873 where  she set up the new school according to the Nightingale principles.  She remained a faithful All Saints sister, later nursing for the community in South Africa.

In the twentieth century, the All Saints Sisters were pioneers in hospice care in America, when in 1987 with the leadership of Sister Catherine Grace (Bowen) and Mount Calvary Church they founded the free standing hospice: The Joseph Richey Hospice in Baltimore.

However, the American works were largely focused on the needs of women and children.  During the Great Depression, most of the institutional works with children were closed due to lack of funding.  In 1972 the last children’s home, St. Gabriel’s, was closed for renovations and the sisters turned their focus to the vast spiritual needs of men and women in our “post-Christian” culture.  In 1973 St. Gabriel’s was reopened as a small Retreat House where over the years hundreds have found peace and renewal of their faith.